Allistair Covell: Canvas To Carpet (8 Feb – 5 May 2019) at the Broadway Gallery in Letchworth Garden City was the first major solo exhibition of Allistair’s work in the United Kingdom. The exhibition, commissioned by Laura Dennis and curated in partnership with the artist, served as a survey of Allistair’s creative practice over a period of five years, focusing on the translation of his abstract paintings and drawings into hand-woven carpets made in Afghanistan and Nepal.

“The Broadway Gallery is very excited to be able to host Allistair’s first major solo exhibition, focusing on his creative journey from canvas to carpet. Visitors will be able to experience the carpets up close adorning the walls of the gallery in a celebration of them as objets d’art. Each carpet in the exhibition, much like Allistair’s original paintings and drawings, vary in style and composition. Whilst some have a more ‘painterly’ appearance, others have a distinctive bold brightly coloured ‘Pop Art’ inspired aesthetic, based on Allistair’s playful plasticine sculptures and vibrantly striking iPad sketches. One carpet perfectly resembles its ink-pen drawing counterpart, owing to the carpet’s high knot count, and has a monotone pattern; a dramatic departure from Allistair’s normal kaleidoscopic colour palette.”

Allistair Covell: Canvas To Carpet at the Broadway Gallery

The carpets on display, or ‘woven paintings’ as Laura and Allistair referred to them as, were handcrafted in Afghanistan by Turquoise Mountain and Nepal by Rug Maker to the artist’s designs. The exhibition successfully showcased how the expert weavers masterfully interpreted the rhythmic energy and spontaneous style of the artist, recreating every expressive brush stroke, splash of colour and hand-drawn shape into a woven knot.

Allistair’s paintings are inspired by his synaesthesic reactions and responses to music and sound. Synaesthesia is a perceptual phenomenon, a condition best described as ‘a union of the senses’ where one sensory experience prompts another. For Allistair, synaesthesia grants him the ability to see colour upon hearing sound.

Colour is an integral ingredient in Allistair’s work and he uses it with real confidence, describing music through gestural brush strokes and creating bold shapes that perfectly capture the spontaneity and abstract fluidity of music on a surface. Allistair’s mixes his synaesthetic experiences with traditional art subjects such as abstract depictions of people, places, events or memories.

In the second room two short films illustrated the different carpet making approaches of each country, showcasing each regions’ varying traditions and production methods with some techniques having remained unchanged for centuries. Rug Maker’s Meet The Makers followed the Nepalese carpet making process whilst the video Carpet Making In Afghanistan produced by Turquoise Mountain, showed the weavers working in Afghanistan.

Along each step of the carpet making process the difference between each country is revealed, from the collection of the wool, the dyeing of the yearns to the finishing. In Afghanistan the weavers use the indigenous Karakul sheep’s wool whereas the weavers in Nepal work with imported wool from New Zealand. The dyeing of the yarns are similar in technique but differ in their sourcing: the dyes in Afghanistan are natural in origin (plants, vegetables and ground rocks) compared to the use of some chemical dyes in Nepal. Even though both carpets are hand-knotted, there is a slight difference in the technique between a Nepalese and Afghan knot.

A selection of the preparatory paintings which Allistair supplies to the weavers were on display in the second room, shown with the original weaver’s carpet graphs and samples of dyed yarn. 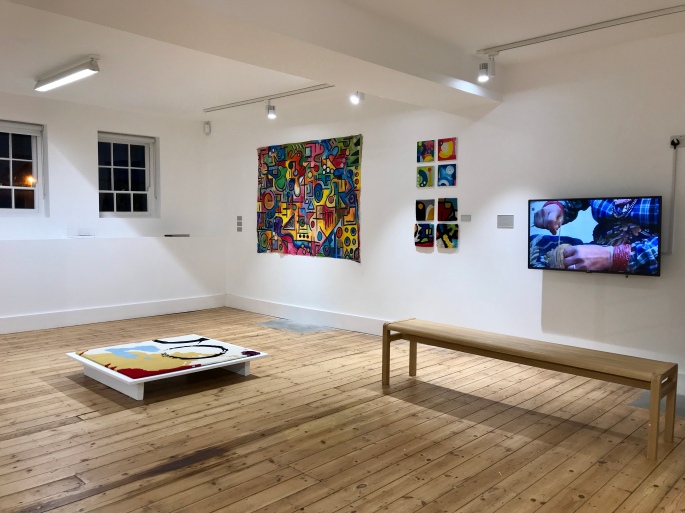 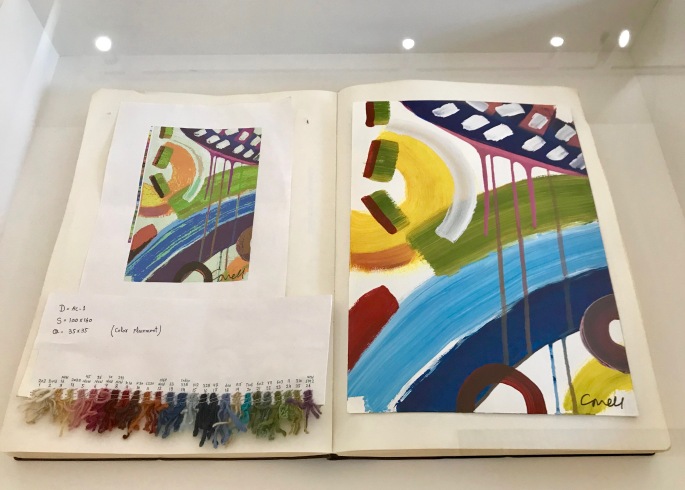 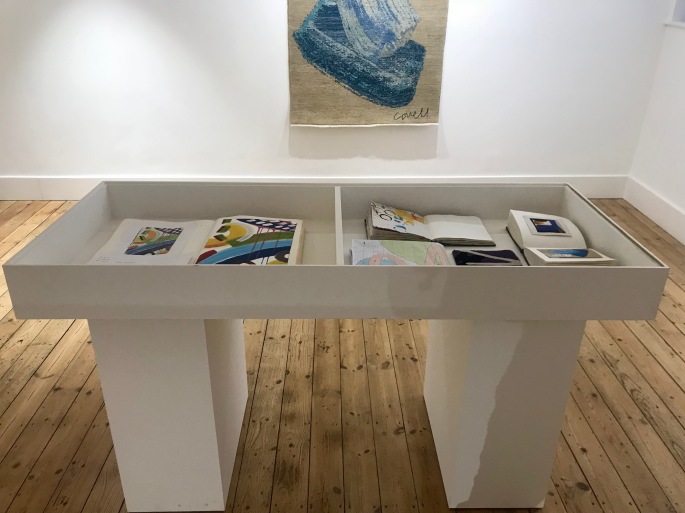 Canvas To Carpet was also the first public display of a small series of 3D plasticine sculptures, showing another aspect of Allistair’s practice and marking a new experimental direction for him. Initially Allistair saw these maquettes as three-dimensional paintings, natural extensions of his two-dimensional work but over time they became objets d’art in their own right, and later the medium of plasticine would assist in Allistair’s creative process when he worked on a commission for the London Design Fair 2018 with Craig & Rose and Calzada Fox.

Allistair has named this series ‘Colour, Shape, Music’ and whilst this title best describes a majority of his work at large, in particular this definition suits the sculptures. To further highlight the process of canvas to carpet, the first maquette Allistair created was interpreted as a watercolour drawing and then made into a hand-knotted carpet in Nepalese wool, with a subtle difference in the pile height, reflecting design’s three-dimensional origins. 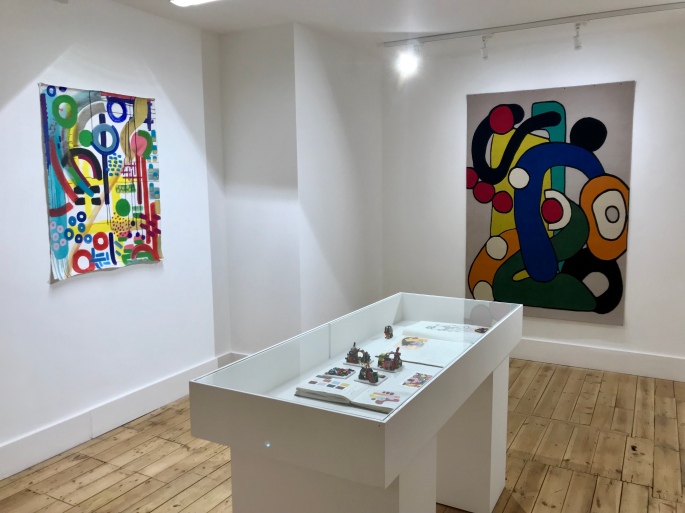 Hanging alongside the Afghan hand-knotted carpet The Wave, was the oil pastel painting on calico Church Window. Dating from 2004, Church Window was chosen to be included in the exhibition as this very early piece predicted the abstract style and colouration Allistair would adopt and further explore in later works, notably the visual language and painting style seen in Excited Melody from 2016 on the opposite wall and the 2009 Study of The City, which inspired the first carpet the artist designed. 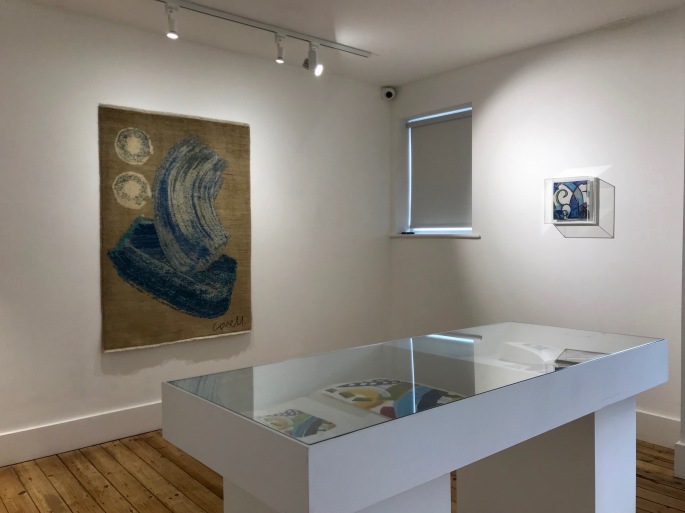 In the only section of the exhibition where colour was noticeably absent and a black and white colour palette created a visual pause, two sketchbooks from Allistair’s time at art college showed visual journeys he’d recorded whilst travelling around London. One of the sketchbook pages inspired the surface pattern for the monotone carpet produced in 2017 by Rug Maker in Nepal.

It was whilst selecting artworks for the exhibition that both Laura and Allistair felt it would be interesting to revisit this graphic style from 2006 and so LGC 18 was created. An updated iPad version of the visual diary, digitally printed on canvas, chronicled Allistair’s journey to his studio and around Letchworth and a trip to London.

Broadway Gallery: What made you want to turn your paintings into hand-knotted carpets?

Allistair Covell: In June 2013 I saw an opportunity in COVER magazine, inviting artists and designers from across the world to ‘design a carpet’. The winning designs would be made into a hand-knotted carpet in Afghanistan and then presented at the world’s largest flooring trade show DOMOTEX in Hannover, Germany. Not knowing much about carpet production I sent in an image of a complex abstract painting and to my surprise my entry was chosen as one of the final six and entered into the international Carpet Design Awards.

In January 2014 the finalists, were flown to Germany to see the carpets for the first time and during the Carpet Design Awards ceremony I was named as the winner of the AfghanMade Best Young Designer Award. Winning such a prestigious accolade encouraged me to research this area of textiles and slightly refocus my practice to include translating my paintings into hand-woven carpets.

BG: Why is music such an important part of your creative practice?

AC: Music is my biggest inspiration with the majority of my paintings named after the song or a lyric that inspired them. As a synaesthete, my paintings are heavily influenced by my sensory responses to sound. I aim to illustrate music on a 2D surface, capturing the rhythms, movements and characteristics of music through the application of colour, shape and pattern. Even though my paintings are abstract in appearance, they are also representational: an orange square is the visualisation of a drumbeat, a circle is the sound of a synthesiser while a paint drip shows the sound of a violin.

BG: What are the main challenges in your practice?

AC: Working in two disciplines can be quite a challenge. Sometimes I have thought that not everything I paint can be easily translated into a carpet as certain brush strokes and colours might prove to be too complex but the Afghan and Nepalese weavers surprise me. Some carpets are so detailed they do look like paintings from a distance which is the effect that I want to achieve.

Another challenge is the time factor: it can take up to four months to hand-knot a carpet owning to the traditional techniques used. I find it fascinating that a sketch drawn very quickly on an iPad ‘in the moment’ when listing to a song can take months to interpret, translate and become a woven carpet.

In the final weeks of the Canvas To Carpet exhibition, Allistair was interviewed by Elspeth Jackson, founder and editor of Ragged Life.

The interview covers a variety of topics including Allistair’s creative practice, how he started working with carpets and weavers in Nepal and Afghanistan, his favourite carpet in the exhibition and also talks about his appearance at the HALI Fair in June 2019, which took place at the Mall Galleries during HALI London. The full interview can be found here.